↓
Home→Teaching→Beyond the Fields We Know→Book Review: Royal Roads: Pilgrimages Through the Four Elements and Beyond

Advance disclaimer: I’ve known Dana Corby for close to 45 years, and Bjoern Hartsfvang for over 30 (or as I sometimes joke, long enough to finally learn how to spell his name).

Royal Roads: Pilgrimages Through the Four Elements and Beyond 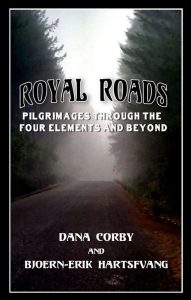 To begin with, this is not a “Wicca 101” book – there is a glut of those available on the market, and most of them aren’t worth the electrons it takes for their listings online.

This book presumes that the reader is already familiar with some basic concepts, yet may not have been taught these particular techniques, which sadly, have fallen out of “mainstream Craft training”, which they were once a very common part of a witch’s basic instruction in herbology and potions. Often they were used in conjunction with the construction and consecration of other Tools of the Art, such as the magical mirror discussed in chapter 2, as well as aids in magical work, such as the spiritual and metaphysical journeys along what the authors have termed the Royal Roads.

Providing a basic ritual script, the authors walk you through the consecration and building of the ritual space, introduce the concept of the Black Watch for those unfamiliar with it, providing some personal example of its application. Such may sound and seem melodramatic and overblown. Until you’ve been in a situation where it would have been useful. (Note: I was present at both of the examples described in this section, and yes, it was a hideous aftermath.)

After those preliminary instructions, we come to the induction ad journey techniques. These are also simple, basic scripts for guided meditations, or Pilgrimages, as termed herein. These include the Lunar Road and the four Elemental Roads.

As with any journey, it’s a good idea to recap and consider your experiences. This is only part of the process involved with “There and Back Again”. Guided Meditations are guided for reasons. Seekers are sent out to seek certain thing – signs, symbols, and such. How do you know if the Quest was successful if you don’t debrief them when they return?

While the basic ritual and journeys as written are designed for group use, the authors give simple guidelines on how to adapt them for solitary use as well, making this a most useful book for both the group and individual practitioner; also included are tables of associations for the elements.

There is a lot of information crammed into 112 pages – (note that Dana tells me it’s only 106 pages, but I’m going off how the listing on Amazon is.)

It’s well worth the cover price. It would be worth it at twice the cover price. To purchase, click the book cover, at present, it’s only available through Amazon, and no, we don’t get any remuneration from them for the link. Also, fixed the link, so that it’s going to the English site instead of the Italian one, I don’t know how that crept in there.

[Nota bene: this reviews differs very slightly from my review on Amazon, in that I changed a few words here and there, and hopefully caught all of my typos, this time.]