Zanoni Silverknife (13 June 1946 – 4 June 2020) was the founding Priestess of the Georgian Tradition, a correspondent of Lady Gwynne, co-progenitor of the StarBorn Sothis Tradition, and, as many have commented on her passing, a force of nature. 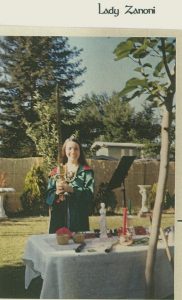 Zanoni Silverknife, then known as Lady Persephone, circa 1973 in the outdoor ritual space of the Georgian Covenstead, in Bakersfield, California

In her own words, “I am Zanoni Silverknife, formerly known as Lady Persephone and signed CoG Charter as such. Tanith and I met Pat in 1970, I believe, and decided to work together as a Coven. I became Priestess and Tanith was our Maiden. I took my First from Pat on 3/21/71 with Tanith presiding as the Goddess and I presided as the Goddess for her First degree on the same day. (Yes, I know it is weird, and that is why I have maintained that things be done in an appropriate manner ever since — once I learned the “rules” from Gwen, Doris Stuart, Bonnie Sherlock, etc.)

February 2 of 1972 I assisted Pat in Initiating Lady Aphrodite into First degree and took my Second on that same day. Michael Terrases was there, as well. I was running my own Coven by then, with Tanith, Bobbie, Ken and Mike T as the group. As I said, no one explained I should have been a Third to do this, so I muddled along as best I could.

August 13, 1973 I received my Third Degree from Lord Pygmalion, High Priest to Lady Siobhan of the Order of the Silver Wheel, NYWTW, a branch off the NECTW line. Wow! Whatta night…um three full days, I should say! Pat knew of this initiation and condoned it to the fullest. After I received Third we often met privately to talk over things and situations that Coven leaders face. My Coven were guests at Pat’s Sabbats and get-togethers.

Since that time I have trained and initiated several people from California, Connecticut and in Washington State…with trainees in Montana. I also practice a Tradition that was brought to us (Moondancer, Rowan Ambersdaughter and myself) by divine inspiration/trance, known as StarBornSothis. However, when I train a person for the Degrees of 1-3, they are trained with the Georgian lessons, given that book and lineage. For those who have specific memories, I take them into SBS where specific trainings are given them and they can reach for further degrees.

I have continued to work for the Georgian Tradition and the Craft in general. I have been in on many beginnings, such as CoG, Council of Women (LA), NW CoG, ERCA, and now Geo-Con. You may find me in Holzer’s book, “The Witchcraft Report” under Jill (not very flattering, I must say) and in “Keepers of the Flame” by Davies- Lynch. I have made radio and television appearances, done several newspaper interviews and have gone to schools and such organizations as Rotary and Lions Clubs to educate the public about the Craft.

I prefer to be called Zanoni. I have legally changed my name and I am no longer “Jill” I hope everyone can just use Zanoni.

Love and blessings, Zanoni Silverknife
In addition to her role as the Founding Priestess of the Georgian Tradition, Zanoni held other initiations as well, some of which are:

Her passing was announced to the Georgian Tradition shortly after her death, by her long-time friend, Patrick Duncan:
“At 10:42am this morning, the world lost a beautiful soul. Jilaine Callison (Zanoni Silverknife) passed into Summerland. She had been battling lymphatic cancer. She would have been 74 on June 13th.”

Zanoni and Moondancer met in 1973, at a Georgian Tradition Gathering, and became close friends. Beginning in 1974, they formed the coven “Sacred Grove of Vril”, which was a founding signee to the Compact of the Covenant of the Goddess in 1975. Zanoni served on the initial Board of COG as a member at large. The Sacred Grove of Vril dissolved with Zanoni’s move to the Los Angeles area and Moondancer’s enlistment in the US Navy.

Upon Moondancer’s return from the Military, they worked together is the Vowetidruba line and began construction of what is now termed the StarBornSothis. After the establishment of StarMist Cuveen, in the StarBornSothis line, they did not work together in a coven, but continued to assist each other as needed into the early years of the 21st Century, at which their friendship became irrevocably broken.

Nonetheless, Zanoni’s passing is reflected with the honor and respect due her.

Hail the Goer! Rest, heal, return and be remembered.