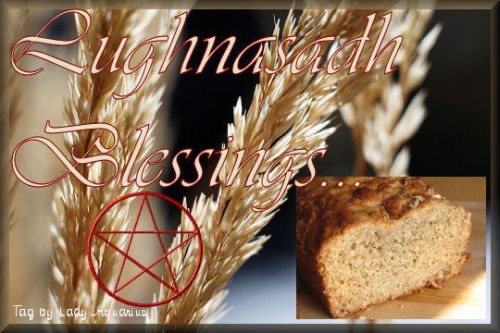 In Celtic languages the name for the month of August is some variation on Lughnasadh or Lúghnasa (pronounced LOO-nə-sə; Irish: Lúnasa; Scottish Gaelic: Lùnastal; Manx: Luanistyn) is a Gaelic festival marking the beginning of the harvest season that was historically observed throughout Ireland, Scotland and the Isle of Man, and is observed at roughly the halfway point between the summer solstice and autumn equinox.

Corresponding to other European harvest festivals, such as the Welsh Calan Awst and the English Lammas, it’s also the name of one of four seasonal festivals that date back across millennia to the time of the Ancient Celts. Traditionally, the Celtic year starts in winter, not spring, affirming that life comes from darkness, and that everything begins with a dormant seed. The first season is Samhain, which begins in November. It’s followed by Imbolc, which begins in February; Bealtaine, in May; and Lughnasa, in August. Each had its own festive dances, music, customs and food.

In Irish mythology, the Lughnasadh festival is said to have been begun by the god Lugh (modern spelling: Lú) as a funeral feast and sporting competition in commemoration of his foster-mother, Tailtiu, who died of exhaustion after clearing the plains of Ireland for agriculture. The first location of the Áenach Tailteann gathering was at Tailtin, between Navan and Kells. Historically, the Áenach Tailteann was a time for contests of strength and skill and a favoured time for contracting marriages and winter lodgings. A peace was declared at the festival, and religious celebrations were held. The festival survived as the Taillten Fair, and was revived for a period in the 20th century as the Telltown Games (Tailteann Games, Taillten Fair).

Each Celtic festival takes place at a turning point in the year, in the days and nights when one season ends and the next begins. People believed that as the seasons changed the edges of the fabric of time gave way, allowing powerful forces to seep through. At those shadowy points between one thing and another, the dead returned to mingle with the living and their presence was acknowledged, welcomed and feared. So festive gatherings were held to honour and placate the dead, as well as to promote the endless flow of energy that, in the ancient Celtic worldview, held the universe in balance. Iron Age Celts gathered to celebrate Lughnasa with music, dancing, feasting, horse racing and boat racing. In the past Lughnasa was also a favoured time for matchmaking and handfastings – trial marriages that lasted a year and a day.

Races at Lughnasa were dedicated to Lugh, the Celtic sun-god whose shining presence gave his people time to save their harvest. According to modern neopagans, they were celebrations of the god’s union with the earth goddess, Danú, whose fertility ensured harvests to come. Horses were associated with both Lugh and Danú: the sun god’s burnished chariot was drawn across the sky from east to west each day by golden stallions, and one of the earth goddess’s names was Mother of Mares. The name Danú is still preserved in placenames all across Europe. In Ireland it appears in the Irish language name for the Dingle Peninsula, Corca Dhuibhne, which means ‘the territory of the people of the goddess Danú.’

As Lammas Day (Anglo-Saxon hlaf-mas, “loaf-mass”), the festival of the wheat harvest, and the first harvest festival of the year, the connection to “First Fruits” becomes clearer. On this day it was customary to bring to church a loaf made from the new crop, which began to be harvested at Lammastide. The loaf was blessed, and in Anglo-Saxon England it might be employed afterwards to work magic:[1] A book of Anglo-Saxon charms directed that the lammas bread be broken into four bits, which were to be placed at the four corners of the barn, to protect the garnered grain. This directly compares to folklorist F. Marian MacNeill’s observations in The Festival of Lughnasa:

[A] solemn cutting of the first of the corn of which an offering would be made to the deity by bringing it up to a high place and burying it; a meal of the new food and of bilberries of which everyone must partake; a sacrifice of a sacred bull, a feast of its flesh, with some ceremony involving its hide, and its replacement by a young bull; a ritual dance-play perhaps telling of a struggle for a goddess and a ritual fight; an installation of a head on top of the hill and a triumphing over it by an actor impersonating Lugh; another play representing the confinement by Lugh of the monster blight or famine; a three-day celebration presided over by the brilliant young god or his human representative. Finally, a ceremony indicating that the interregnum was over, and the chief god in his right place again.

The neopagan festival of Lughnasa celebrates aspects of the harvest of First Fruits and the grain harvest; barley, rye and wheat (all historically referred to as ‘corn’) are ripe at this time of the season, and work in the fields to bring in the harvest is under weigh.

The neopagan rites may draw from the agrarian harvest model, or from the “Battle of the Oak and Holly” or any of a number of other seasonal motifs involving death and rebirth.

Within NECTW, we celebrate the harvest as the Lady prepares to take her time of rest.