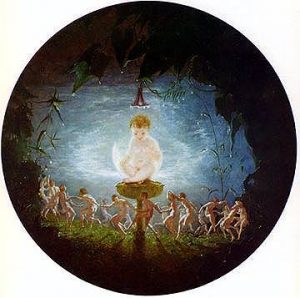 As W.Y. Evans-Wentz said in his introduction to The Fairy Faith in Celtic Countries:

“At all events, and equally for the unbeliever and for the believer, the study of the Fairy-Faith is of vast importance historically, philosophically, religiously, and scientifically. In it lie the germs of much of our European religions and philosophies, customs, and institutions. And it is one of the chief keys to unlock the mysteries of Celtic Mythology. We believe that a greater age is coming soon, when all the ancient mythologies will be carefully studies and interpreted, and when the mythology of the Celts will be held in very high esteem. But already an age has come when things purely Celtic have begun to be studied; and the close observer can see the awakening genius of the modern Celt manifesting itself in the realm of scholarship, of literature, and even of art – throughout Continental Europe, especially France and Germany, throughout Great Britain and Ireland, and throughout the new Celtic world of America, as far west as San Francisco on the great calm ocean of the future facing Japan and China. In truth the Celtic empire is greater than it ever was before Caesar destroyed its political unity; and its citizens have not forgotten the ancient faith of their ancestors in a world invisible.”

Faerie is an important part of our Craft. There is a call to our blood that leads us upon any of the three roads of Thomas the Rhymer — the braid, braid road, level and even that runs straight on across the sand, so that no one travelling by  it can lose their way; or,  the narrow, winding and long road, beset thick with thorn-hedge and briar-hedge, so wild and tangled, that those who travel it have difficulty in persevering on their journey; or, for those most determined of folk, the bonnie, bonnie road that winds up the hillside among brackens and heather and golden-yellow whins…

That third road – the bonnie road – that runs up the brae among the ferns, and leadeth no mortal kens whither — leads to fair Elf-land…and that road take we.1

This section includes several faerie poems and songs from a collection that a friend found on the internet, and forwarded a zipped archive to me; however, they failed to include the URL of the original site. During one of our site revisions, several of these pages had code duplicated, rendering them garbled. With the present revision, the section has been largely taken offline and each page is being reviewed and cleaned up for reposting. Those which have been reviewed are listed in the sidebar menu under Fairy Lore; if the piece you are seeking is not shown, rest assured that it will make a reappearance with time.

A few places elsewhere to look:

R.J. Stewart has been kind enough to provide the text of the 1692 book The Secret Commonwealth of Elves Fauns and Faeries by Robert Kirk on-line for free at http://www.dreampower.com/texts.html, while R J Stewart’s workshop calendar and other materials is available at www.dreampower.com. Both websites are heartily recommended. The Secret Commonwealth of Elves Fauns and Faeries is the journey of the Reverend Robert Kirk, who, according to credible witnesses, spent several years in Faerie, returned to the Land of Man, and then disappeared again — some say he still lives on, in Faerie;

We will be adding more faerie lore to this site in the near future.

The collection of “Fairy Poems” associated with this website in the past have been removed, in part to mistakes in author attribution, lack of relevance to what we do, or by request of an author. Some may be restored at a future date.

The email addresses for NemedCuculatii.org will be removed in the near future due to being SPAMMED to death.

END_OF_DOCUMENT_TOKEN_TO_BE_REPLACED

It’s been quite a while since we’ve had anything to post publicly on the site. That’s part of the ennui of being a group that’s existed for a long time (in our case, since 1992 as Nemed Cuculatii, and before … END_OF_DOCUMENT_TOKEN_TO_BE_REPLACED

Friends and kin are sharing stories about their Craft history. These are important. As many of the people involved are now dead, I don’t mind naming some of the names, other’s I’ll keep to myself…and some have been public for a long time.

So, despite being raised in a nominally Christian home (Mother was Assembly of God, Dad was Southern Baptist), I somehow wound up a Witch.

END_OF_DOCUMENT_TOKEN_TO_BE_REPLACED

So, some time back, I was drafting out a piece about the Witches’ Pyramid, aka the Four Words of the Magus, aka The Powers of the Sphinx, aka … Anyway, in looking for some relevant data points, I came across … END_OF_DOCUMENT_TOKEN_TO_BE_REPLACED 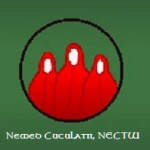 We noted that our site vanished around the beginning of June (it was still here, but no posts or pages were displaying,) It appears that an automatic update crashed the processing; the culprits have been identified and remedial action was … END_OF_DOCUMENT_TOKEN_TO_BE_REPLACED

MAGICKAL MANNERS:Guide to Magickal Etiquette by Puck Shadowdrake My rating: 4 of 5 stars Puck has drawn on his years of experience as both a student and leader of Wiccan covens to present this very useful beginner’s guide to what … END_OF_DOCUMENT_TOKEN_TO_BE_REPLACED

Whither goest thou, o Nemed Cuculatii? To be honest, I don’t know. As a coven, we haven’t met in several years, due to the vagaries’ of life. The pandemic has only intensified that ennui, but the horizon’s glow in the … END_OF_DOCUMENT_TOKEN_TO_BE_REPLACED

Remember to breathe. Regardless of anything else that takes place, 4 November will follow 3 November, and then the 5thm 6th, 7th, and so on. Life will continue apace. It’s increasingly likely that we will not know who actually “won” … END_OF_DOCUMENT_TOKEN_TO_BE_REPLACED

Shamanism: Agony Before the Ecstasy or: Give me that Old Age Religion (originally printed in Converging Paths, 1987 Fall Equinox)by Scarecrow  There is an old Central Asian story of the time that Nasruddin Hoca, the Sufi teacher of Anatolia, was … END_OF_DOCUMENT_TOKEN_TO_BE_REPLACED

Zanoni Silverknife (13 June 1946 – 4 June 2020) was the founding Priestess of the Georgian Tradition, a correspondent of Lady Gwynne, co-progenitor of the StarBorn Sothis Tradition, and, as many have commented on her passing, a force of nature. … END_OF_DOCUMENT_TOKEN_TO_BE_REPLACED