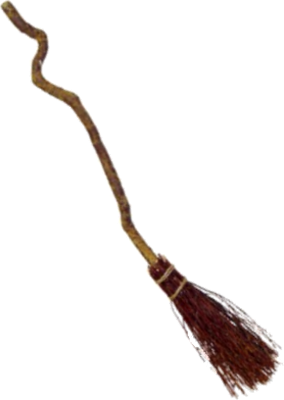 A broom dropping in front of the door means company before the day is over.

Always pick up, for luck, a broom that is lying on the floor or ground.

Always sweep dirt out the back door or you will sweep away your best friend.

Bad luck will befall you all year, if you sweep on New Year’s Day.

Burn up the rubbish when you sweep on New Year’s Day and you will have money throughout the new year.

Carry a broom under your arm for luck.

Carrying a broom over your shoulder will give you bad luck.

Do not sweep immediately after the departure of a guest or you will sweep him bad luck.

Dropping a broom while sweeping is the sign of a new carpet.

Hitting someone with a broom means that he will go to jail before a week has passed.

If a broom falls as you are passing it, you will have bad luck.

If a broom falls in front of you and you step over it before picking it up, you will have a “bed of sickness.”

If dirt is swept out a door before sunrise, you may expect bad luck.

If dirt is swept out of the house on Friday, the house will burn.

If someone comes in to see you and you pick up a broom and go to sweeping in front of them, that is the sign they are not wanted and you want them to go home.

If you go to someone’s house and have to step over a broom, it shows that the mistress of that household is an untidy housekeeper.

If you hand a broom through a window to someone, you may expect bad luck.

If you hit a person with a broom just before he starts “uptown,” he will have trouble before returning.

If you let a broom fall and do not step back over it immediately, someone dirtier than you will come.

If you must borrow a broom, take it without the owner’s knowledge, and you will not have bad luck.

If you must sweep on New Year’s Day, you can avert bad luck by not taking up the dirt and leaving it in a pile on the floor.

If you must sweep your kitchen after sunset, you can avert bad luck by burning the dirt.

If you step over a broom you will be arrested.

If you sweep after dark/ You will bring sorrow to your heart.

If you sweep after dark, you will sweep out the money made that day.

If you sweep in front of someone, you are sweeping them off the earth.

If you sweep under someone while he is sitting on a chair, you are giving him bad luck.

It causes bad luck to sweep a porch after dark.

It is a sign of good luck to have a broom drop in front of you.

It is a sign of misfortune, to lay a broom on the bed.

It is unlucky to borrow a broom.

It is unlucky to sweep dirt out a door at any time. Pick up the dirt and carry it outdoors for luck.

It is unlucky to sweep on Monday.

It means bad luck when a broom falls across the derail

It signifies bad luck, if you sweep under a bed on which someone is lying.

It signifies bad luck, to carry a broom through the house from the front door to the back door.

Keep the corners of your broom square or even for luck.

Lean a broom against a bed and you will be unlucky.

Lending a broom will cause you bad luck.

Let the broom rest with the straws up and you will be lucky.

Letting the sweeping edge of a broom wear off at the two corners will bring you bad luck.

Never burn up a broom; it will bring you bad luck.

Never sweep dirt out the front door; it will bring you bad luck.

Never sweep the kitchen after supper, whether daylight or dark, or you will sweep out all your money.

Never sweep your kitchen early in the morning before sunrise, or you will be unlucky.

Stand a broom on its handle and you will always be poor.

Step over a broom and you will break your mother’s back.

Stepping over a broom is a sign of slovenliness.

Stepping over a broom will bring sorrow to your heart.

Stumbling over a brook handle will bring you good luck.

Sweep after dark and you will never be rich.

Sweep dirt out of the house on Friday and it will cause you bad luck.

Sweep on the third day after Easter and you will have bugs in the house.

Sweep the top of a bed and you will have bad luck.

Sweep under a person’s feet while he is sitting in a chair and he will not grow any more.

Sweeping after dark means you will lose a friend.

Sweeping dirt over a doorstep after six o’clock in the evening will bring bad luck.

Sweeping on New Year’s Day means that you will sweep out the money made during the coming year.

Sweeping under chair upon which someone is sitting will make you unlucky.

The child who steps over a broom will get a whipping.

The one who is hit by a broom will soon be arrested.

The person under whose feet you sweep will always be poor.

The person who is hit on the top of the head with a broom will be arrested.

To avert bad luck after you have walked over a fallen broom, step backwards across the broom.

To brush your boot with the broom while your are sweeping will give you bad luck for a week.

To have good luck, place the broom on its handle in a corner.

To set a broom in the corner with the brush up shows that you are an untidy housekeeper.

To step over a broom will start a quarrel in the house.

To sweep after dark will bring trouble to the house.

To sweep dirt out the door is a sign of a slovenly housekeeper.

Touching anyone with a broom while you are sweeping causes bad luck.

Walking over a fallen broom will cause you bad luck.

When a broom falls across the door, it indicates that you will walk on strange ground.

When a small child takes a broom and begins to sweep, company is coming.

When someone is hit with a broom, he should spit on the broom and take ten steps backwards so he will neither have bad luck or be arrested.

When you sweep after dark, you sweep away your friends and let enemies in.

You sweep away your best friend by sweeping after dark.

You will be unlucky, if you do not pick up a fallen broom at once.

Your luck will be swept away, if you sweep your kitchen after sunset.