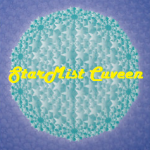 StarMist Cuveen formally existed from February 1982 until November 1988, and was led by Moondancer and Raven.

It was one of the original cuveens of the StarBorn line, which was founded by Zanoni Silverknife and Moondancer Starseeker in the late 1970’s, and formalized in 1980.

Both Zanoni and Moondancer originally trained and initiated in the Georgian Tradition; Zanoni was the founding priestess, along with the late George Patterson, and Moondancer was an initiate of the second Georgian coven. They worked together in several covens between 1973 and 1981, moving from practice within the Georgian tradition to the establishment of their own StarBorn Sothis tradition, with Moondancer later becoming an initiate of Gwen Thompson’s New England Covens of Traditionalist Witches line and eventually moving to that tradition alone for coven practice

StarMist was established in late 1981 by Moondancer and Raven, who wed shortly thereafter. Formal acceptance of the Cuveen’s establishment within the StarBorn Sothis tradition was given in February 1982 by Zanoni Silverknife. It’s training and ritual practice was a combination of materials from the Georgian, NECTW, NY Welsh, 1734, Brittic and other training and lore that Moondancer had gained over the years.

We worked mainly in Georgian/Welsh/Star Born until 1984. During that summer I began to cull through my Book and discard anything that didn’t “speak” to my soul.  What I was left with was a mixture of 1734, Welsh, Star Born, and NECTW.  That Yule we met two people that played a big part in the changes that we next went through.

Murtagh and Gwethalyn were Initiates from the East Coast from TDD (Tuatha de Danaan), an offshoot branch of NECTW.  After months of talk and visits, they agreed to elevate Moondancer and myself to the Third Degree as a way to tie our two lines together.

From there to here has been a long strange journey (as Jerry Garcia once said) but the trip has been a good one. Somewhere around 1992 Moondancer and I flew to New York to visit with Gwion from the New York Welsh Tradition and Theitic of NECTW.  There, we spend an enjoyable weekend doing ritual, discussion, and shopping.  The following year Theitic flew out to Seattle and spent a weekend talking with us, culminating in our being elevated to High Priestess and High Priest in NECTW.

Since that time, we have worked strictly within the NECTW framework and have used it in our training of students.

From 1984 until 1987, StarMist was a member of the Southern California Local Council of Covenant of the Goddess. When Raven and Moondancer moved from California to Washington, the coven hived into StarMist Cuveen, StarMist Grove (a training group) and ShadowDragon Coven. StarMist Grove closed shortly thereafter, and ShadowDragon Coven moved into the Georgian Tradition. StarMist Cuveen itself closed and reformed as Nemed Cuculatii in November 1988.

It should also noted that pagan author Kisma Stepanich has listed (at least in the past), in her curriculum vitae, that she was a founding member of Star Mist in Southern California. At no point in time was Ms. Stepanich affiliated with our coven; her coven affiliation during that time period was with the Cauldron of Cerridwen, whom we knew from mutual participation within the Southern California Local Council of Covenant of the Goddess. In email exchanges, she has confirmed that she is referring to “a different Star Mist”.